A Friend in Need 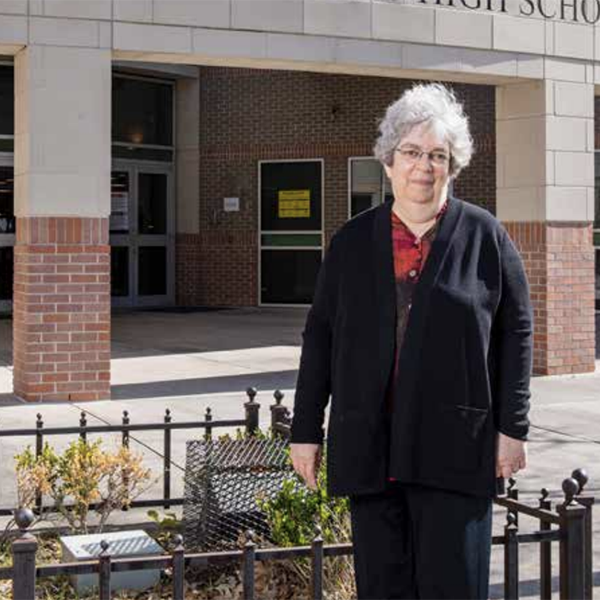 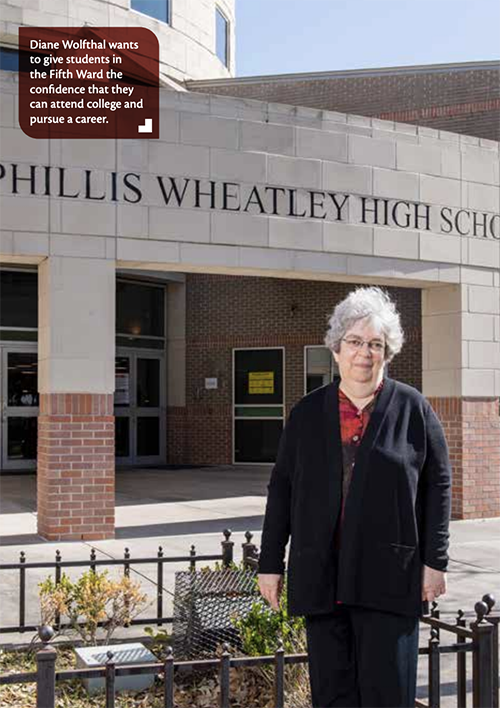 Diane Wolfthal retired from Rice University in 2020 in the midst of the pandemic, but the former art history professor didn’t let the threat of the virus stop her from creating a nonprofit to help a poor high school in Houston’s Fifth Ward.

“I felt like the outside world had to support them,” said Wolfthal. “I knew there was a need, and I believe in education.”

Education has been a large part of Wolfthal’s life. She taught at several universities, including Columbia and Arizona State, and for 12 years led classes at Rice in medieval and early modern European art history. When she retired, Wolfthal was named the David and Caroline Minter Professor Emeritus of Humanities and professor emeritus of art history.

Wolfthal now has another equally long title as president of Friends of Phillis Wheatley High School. This is the nonprofit she started in 2021 with the help of her daughter, Leah, who works for another nonprofit in the Fifth Ward, which lies about two miles northeast of downtown. Fifth Ward has long suffered from economic depression and is home to thousands of underserved students.

“I asked my daughter if she knew of a school that needed help, and she suggested Wheatley,” Wolfthal said. During the ’70s and ’80s, Wheatley was known for being a powerhouse in basketball, winning state championships and sending players to compete in college. Although it was predominately Black during that period, the school now is about equally split between Black and Latino students.

Following her daughter’s suggestion, Wolfthal contacted the principal and other school officials to ask them about the school’s priorities and needs. “We didn’t want to impose what we thought should be happening.”

Wheatley High School principal Joseph Williams said that Wolfthal has been sensitive and responsive to the wants of the school.

“She is very passionate about meeting any needs our scholars may have and is very resourceful in networking with her colleagues and friends to obtain the needs of our families,” he said. “She and her team check in weekly to see how they can support us, which is so important for our scholars to have this structure and know that Friends of Phillis Wheatley are there.”

Wolfthal then formed an executive board composed of five people, among them Linda Neagley, associate professor emeritus of art history. She recruited Rice professors and students as volunteers. Christopher Sperandio, associate professor of painting and drawing at Rice, created a logo for the nonprofit.

After a year of existence, the Friends of Phillis Wheatley High School has accomplished a list of projects to be proud of. The group donated more than $4,000 to the school in food, hygiene supplies, and new and gently used clothing. Rice residential colleges contributed by conducting clothing drives.

“This resulted in a huge donation of clothes and other items left behind by students,” she said.

The group also bought 36 new winter coats for $5 each from Operation Warm, a national nonprofit that provides winter clothing at a discount, and gave them to the students. Furthermore, the group gave away 48 polo shirts with the school’s logo to students who had improved their school attendance.

In another program, Friends of Wheatley hired a teacher to prepare students for the Scholastic Aptitude Test (SAT). The students were offered two-hour classes every Saturday morning for 10 weeks, along with breakfast and free tutoring by Rice students. Many of the Rice volunteers were members of the Black Student Association and the Future Teachers Club.

“My involvement with this organization stems from my passion to teach and be a resource for students who are underrepresented,” said Mignote Tadesse, a junior at Rice, majoring in cognitive science.

“I have been in their position growing up and was lucky enough to get guidance and mentorship at an early age, which helped build my support system and prepared me for my academic career.”

Another Rice student who has generously given of his time is Matthew Gutierrez, a sophomore, majoring in chemistry and inorganic materials. “I love volunteering at Wheatley,” he said, “because I want to go into education later in my career. I can see this as an opportunity to not only connect and help students learn, but also to better myself by gaining some experience in teaching.”

Wolfthal said that Tadesse and Gutierrez have been devoted and enthusiastic volunteers. Tadesse has served as a tutor, assisting students with their reading comprehension and test-taking. Tadesse is in charge of social media for the group and has established an Instagram account to promote the group’s activities and stories. She also recruited tutors and has plans to start a Friends of Phillis Wheatley High School Club at Rice. Gutierrez goes every Saturday to the school to tutor students in English and history and prepare them for the SAT.

“I wish I had more volunteers like Mignote and Matthew,” said Wolfthal.

I would love to see more Rice students tutoring at Wheatley, getting to know the students and seeing that not everyone is as fortunate as they are.

For the future, Wolfthal wants to include cultural enrichment activities for the students, such as visits to museums, the theater, and musical and science events. She would also like to take students to visit colleges and universities as a way to encourage them to pursue a college degree and a career.

“We want to build their confidence, to give them a sense that they can do it, to go to college, be successful and see that there’s a big world out there,” she said.