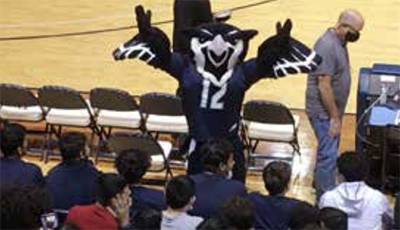 The annual School House Mania returned to Rice University’s Tudor Fieldhouse Dec. 16 after a two-year hiatus caused by the pandemic. COVID-19 protocols called for a smaller crowd of about 1,000, but the noise level produced by the excited students was deafening.

Since 2014, the Rice University School Mathematics Project (RUSMP) and the Rice Athletics Department have partnered in this popular event for elementary and middle school students from local schools. This year, the Rice men’s basketball team played against the University of the Incarnate Word and won 85 to 55.

While the basketball teams warmed up, the RUSMP staff and friends led the energetic students in a series of activities that included a breathtaking virtual math tour of the Rice campus; a look at STEM across the Houston area; and a Transformation Shuffle that got students out of their seats to demonstrate translations, reflections and rotations to music.

During game breaks, STEM questions kept students engaged in doing math. As the students departed Rice on their school buses, they were given a STEM booklet with activities, math problems and ticket vouchers for future Rice basketball home games.

“Our kids really needed this field trip,” said a school teacher. “The pandemic has left them yearning for normalcy. Thank you, Rice for putting on this great event!"