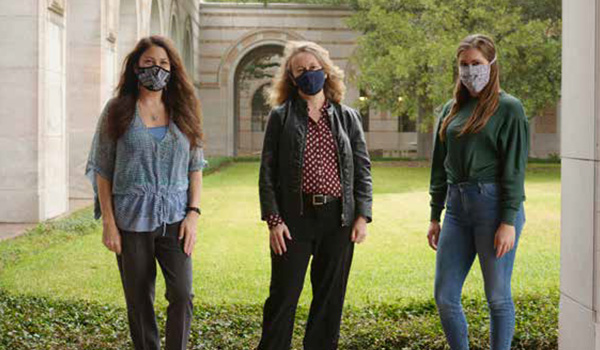 Rice University’s Fondren Library was one of five academic libraries in the country to win the American Library Association’s grant for Resilient Communities: Libraries Respond to Climate Change.

The purpose of the grant, which was awarded last fall, is to educate people about environmental justice and instruct them on how to prepare for extreme weather. Fondren Library is achieving the grant’s goals by partnering with local organizations and involving community members, especially residents of vulnerable and marginalized neighborhoods. Although Houston is one of the most diverse cities in the United States, there are environmental racism struggles.

As part of the grant, Fondren entered into a memorandum of understanding with Communities Responding to Extreme Weather (CREW) to become a designated Climate Resilience Hub. This means that Fondren will build local climate resilience through inclusive education, service, and planning for extreme weather and emergencies.

On April 20, Kress will lead Fondren’s first annual climate change preparedness event. The goal will be to educate the public about preparing and responding to extreme weather events, including hurricanes, flooding, fires, extreme heat and extreme cold, as well as being prepared for emergencies.

Also, April 1, the Green Team is planning to have a panel discussion about the documentary “Fire and Flood: Queer Resilience in the Era of Climate Change.” Collaborating in this event are Rice’s Center for Environmental Studies (CES), Rice’s Administrative Center for Sustainability and Energy Management, Rice University Center for the Study of Women, Gender and Sexuality, RES and Houston’s Citizens’ Environmental Coalition (CEC), a nonprofit alliance that includes over 100 Houston-area organizations.

The panel features Vanessa Raditz, director of the documentary; Kennedy Loftin, chief development officer at the Montrose Center; and Rice anthropology graduate student Kristin Gupta. RES screened the documentary live during Sustainability Week and Fondren provided people who signed up for the panel access information to watch the film in advance.

This spring semester Green Team member Spiro is working with Bridgette Murray, founder and executive director of Achieving Tasks Successfully, a local nonprofit, in helping Holland Middle School in Pleasantville, an underserved Houston neighborhood. Together they are working on an educational program for students to investigate air quality. The purpose of the program is for students to gain data analysis and presentation skills as well as to bolster their confidence in making a change in their communities.

“At a time when public education is at its greatest challenge, this project will allow some to identify a new passion to improve their future,” Murray said.

About 50 people registered for the panel, which highlighted roles that women play in tackling local problems, engaging the community and building nonhierarchical groups. The group exposed local environmental challenges, including lack of zoning, air pollution and flooding. This event was sponsored by the Green Team, CES, CEC and RES.

The second event Dec. 2 focused on “Finding Hope in Extreme Weather.” Vernon Walker, CREW program manager, was the featured speaker. About 40 people from Rice, Texas Southern University and Houston Community College discussed how extreme weather affects persons of color and lower income populations. Topics included the connection between environmental justice and social justice and how climate resiliency is based on social resiliency.

For more information about the Green Team activities, visit https://library.rice.edu/sustainability.