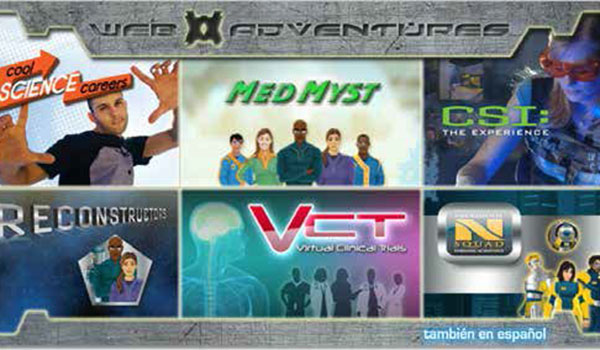 Web Adventures (WA) is a digital media program that uses educational games to teach middle and high school students about health and science and to inspire them to pursue careers in science.

Originally developed by Rice University’s Center for Technology in Teaching and Learning (CTTL), WA offers 53 free adventure games, with additional language versions in Spanish and German for the most popular titles in the series. The games instruct students about forensics, science careers, microbiology, neuroscience, and drug and alcohol use. Numerous studies specifically conducted on WA indicated a positive impact of these games on students’ science motivation and knowledge.

After CTTL closed in 2016, its executive director Leslie Miller asked that Rice University School Mathematics Project (RUSMP) host the website. Although no improvements or content updates to WA were expected from RUSMP during the hosting period from 2016 to 2020, RUSMP responded to users’ questions and provided some technical support through Rice University’s Office of Information Technology.

Over the years, WA games served millions of students and teachers across the globe, with over 80% of users accessing from the United States. For example, one of the most popular games created in 2007, “CSI: The Experience,” attracted more than six million users who completed more than 10 million game sessions and viewed more than 35 million game pages with an average time of about eight minutes per session.

Recent extinction of the Flash technology from WEB would have interrupted middle and high school teachers and students access to these games. Thus, RUSMP felt obligated to respond quickly to the outcry from the global community during the pandemic when online tools became vital to education.

An archival website was developed through funds from the National Science Foundation (NSF DRL 2041426) so that WA could be used offline by downloading a version of each game with a stand-alone Flash projector. Other supplemental resources, such as cool links and teacher guides, are still available online. The archival game site extends the window of access to the old games.

The limited archival version still attracts substantial traffic. In less than a year from when the website was launched, more than 22,000 individual games have been downloaded and more than 120,000 pages have been viewed. This clearly indicates the continued demand for WA for both formal and informal educational settings.

“Dear RUSMP, your message about Web Adventures is akin to a Christmas gift to all of us,” said a high school teacher in Wyoming. “Thank you for listening to teachers and supporting us and for all your hard work. This is awesome news.”

More information about WA can be found here at https://webadventures.rice.edu/.