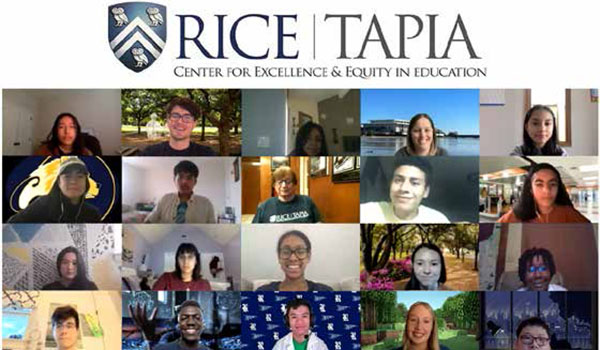 About 100 middle and high school students from Texas and around the world experienced a challenging online summer camp offered by the Tapia Center for Excellence and Equity in Education at Rice University.

Students in the Computational Thinking and Equity program discussed STEM and equity topics as it related to the college admissions process. Their task was to write an algorithm to decide whom to admit into an imaginary college based on a spreadsheet of attributes of a thousand hypothetical applicants. Their goal was to be as equitable as possible.

In addition to building their algorithm, campers also attended lectures by industry scientists and university professors, including National Medal of Science winner Richard Tapia, a mathematician and professor in the Department of Computational and Applied Mathematics at Rice.

Many students learned computational thinking alongside issues of diversity, equity and inclusion. They read and discussed articles about the history of affirmative action in education and the use of the SAT to understand the role of equity in the college admissions process. They implemented their algorithm in Google sheets and learned some basics about programming and mathematics, including logicals, conditionals, constraints and tradeoffs.

At the end of the week, campers presented their algorithm along with their interpretation of equity and how equitable their algorithm was. The task proved difficult as campers had to make sure not to inadvertently introduce their own biases into their algorithm. As one student said, “It is tricky to put an algorithm in the computer and not accidentally put something in.”

Students assessed how equitable their algorithms were by comparing the similarity in demographics statistics between the admitted students with that of the applicant pool. As a result, it wasn’t until their formulas were run that campers knew if the resultant statistics matched their expectations.

As one student reflected, “I did feel equitable, but seeing the stats, I don’t feel that my algorithm was as equitable as I thought it would be.” Regardless of how students chose to design and evaluate their algorithms, all campers were challenged to expand their minds.

“I believe this camp has changed my view of when computers should be used in society since I have never focused my attention on algorithms and equity,” one student said. “It was very interesting to see how both play a role together to create the society we live in today.”

The camp also contributed to the career development of 15 Rice students from a variety of racial, ethnic and socioeconomic backgrounds. These instructors received training, mentorship, and experience in STEM, teaching, and aspects of diversity, equity and inclusion.

The program is part of the Tapia Center’s effort to empower motivated, underrepresented students that are passionate about their education. The program was developed in collaboration with the Operations Research Team at Google. Funding was possible through generous grants from ExxonMobil and the professional society INFORMS. For more information about future programs, visit tapiacamps.rice.edu.