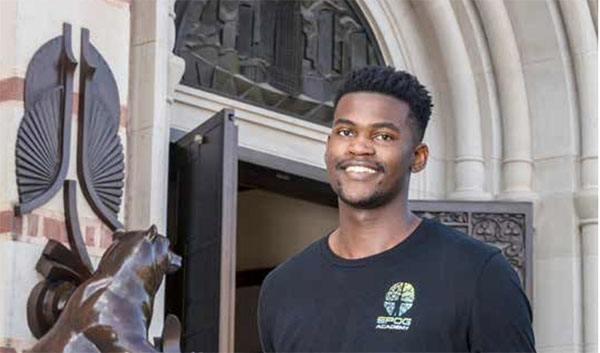 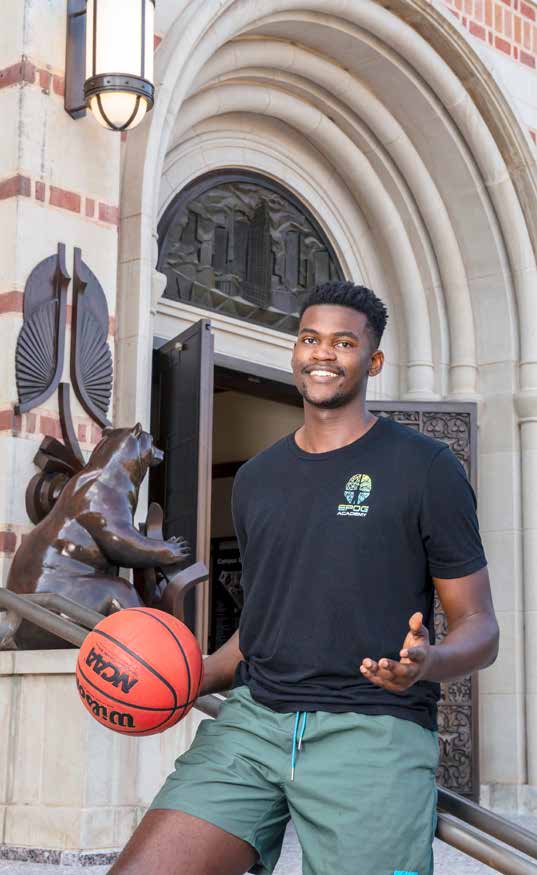 Standing 6 feet 8 inches tall, Tim Harrison ’20 thought that playing in the NBA was within reach. The San Diego native was a high school basketball star and was highly recruited by universities. When he came to Rice University, though, his dream of glory and money slowly dissipated. The disappointment led him on a journey of personal growth and to creating a nonprofit that helps high school students achieve their potential.

During his four years at Rice, he came off the bench and occasionally started a game. “I didn’t get to play major minutes,” he said. “I feel that I didn’t breakout and that I didn’t have the college basketball career that I wanted.”

Suddenly, his identity, based largely on being a basketball player, crumbled, and he was at a loss as of what to do next. He asked himself how he could take this negative experience and use it as a catalyst for his personal growth. He found the answer in studying psychology to understand himself better and in joining Rice’s Doerr Institute for New Leaders. The Doerr Institute helped Harrison find his identity as a leader and he consequently became president of the Black Male Leadership Initiative and participated on the NCAA student-athlete committee.

“It was from this newfound sense of identity and strength that I pursued a career in management consulting,” he said.

He was offered a strategy consulting job from Accenture when he was a junior and was planning to join the company after graduation. But when he graduated in 2020 the country was in a turmoil with the killing of George Floyd and the COVID-19 pandemic. As a response to the increasing social unrest, Harrison, who considers himself a man of faith, felt compelled to do more with his life.

That quote was an epiphany for Harrison who discovered that what made him come alive was helping others reach their potential. “I decided that I wanted my life to be about making the world a better place, and that my unique contribution revolved around helping more people realize their potential.” he said.

He decided to forego the lucrative job offer and devote all his energy to his newfound mission. He became certified as a leadership coach and created the Enjoyable Pain of Growth (EPOG) Academy, a nonprofit that seeks to inspire and equip youth to realize their potential.

Around this time, he also met Gregory Russell Benedikt, who was working full time in a private equity firm yet found his job unfulfilling. What Benedikt really wanted to do was help others become “the best version of themselves.” When Harrison invited him to join EPOG, Benedikt left his job and became chief financial officer of EPOG.

“I wanted to partner with Tim to build the Enjoyable Pain of Growth Academy because he is one of the few people I’ve met who is as equally passionate about personal growth as I am,” Benedikt said.

Harrison and Benedikt both see education as more than academics. “A holistic approach is needed to prepare our youth to thrive in the 21st century,” Harrison explained. EPOG helps students reach their potential, Harrison said, through a combination of leadership coaching and personal development programs that purport to increase the student’s self-awareness, achieve their goals and discover their power.

The group likes to use the word POWER as an acronym for Purpose, Ownership, Wisdom, Execution and Resilience.

Acquiring power is like taking a road trip, Harrison explained. “Purpose is about deciding that you’re going on a trip and choosing a destination. Ownership is about identifying your vehicle, understanding your strengths and getting in the driver’s seat to take responsibility. Wisdom is about setting your goals, pathways and schedule. Execution is about doing the work to reach your destination. Resilience is about how you come back when there are obstacles in your path and things don’t go your way.”

Professional coaches help the students navigate the long-distance journey. The coaches provide a framework of support by asking questions and listening and leading students to reflect. Coaches never offer advice or tell the student what they need to do.

“One thing I want to emphasize is that coaching is not mentoring,” Harrison said. “Coaches are professional listeners who help students draw out their strengths and clarify their goals.”

The group took a first step toward fulfilling its ambitious plan of making a holistic education available to everyone, especially to underserved students. A program was started in February at YES Prep Southside in Houston, where 22 9th graders met with a coach twice a month for 35 minutes during each session. The 19 coaches who led the workshops did so on a volunteer basis.

Harrison said that the program has been a success according to a study conducted by EPOG’s research team. The report shows that more students view themselves as leaders, had less trouble executing goals, had increased emotional awareness and had higher levels of resilience.

“Before working with my coach, I wasn’t paying attention to what I was working toward in the future,” one student said. “Setting goals with my coach pushed me to work harder and I was more motivated.”

As for the future, Harrison said EPOG plans to double the number of students at the school and include freshmen and sophomores in the program. The group raised $70,000 last year through donations, grants and fundraisers. This fiscal year, the goal is to raise $120,000.

Creating a nonprofit such as EPOG is a long way from his dream of playing in the NBA. Harrison doesn’t downplay how wonderful it would be to play professional basketball. “I would make a lot of money and get to play the game I love, but it would have been more about me,” he said. “But I believe this dream is bigger than the NBA and what I’m doing now is more of a life of contribution, more a life of cultivation, and more a life of connection with people and my purpose.”