Succeeding at a Fast Pace 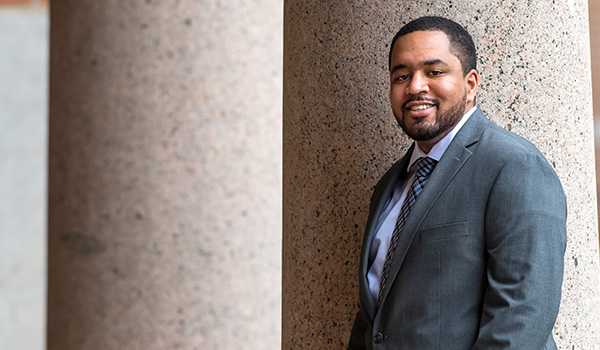 Cortlan Wickliff was a child prodigy with a competitive streak. With his ambition in overdrive, he raced to many of his goals, reaching them at an early age. At 6, he was in a third-grade gifted and talented program; at 14, he was in college; at 19, he graduated from Rice University as the youngest engineer in the nation; and at 22 he graduated from Harvard Law School, and after passing the bar, became the youngest attorney in Texas. Then at 25, he received a Ph.D. in engineering from Texas A&M.

Now 29, Wickliff has been at Rice University for two years, serving as associate vice provost for academic affairs and strategic initiatives. Having achieved so much so early in life, Wickliff wanted to share his secrets of success with youth, so he wrote “Young and Driven: Overdrive.” The 250-page book outlines step-by-step how to convert big dreams into reality.

“The book is not necessarily autobiographical, but it shows what are the exercises, the lessons learned that allowed me to accomplish my goals,” he said. “If you have a dream or a desire to do more, read this book. By the end, you will have enough concrete steps, exercises and tools to go out and achieve what you want.”

Full of inspirational sayings and advice, “Young and Driven” is intended to spur the young student to overcome challenges and work hard toward a successful career. For example, Wickliff writes, “… where you start does not determine where you will finish. In life, having a rocky start to your journey or a difficult past does not stop you from accomplishing great things.” He adds, “You are not the sum total of your circumstances; you are the sum total of your choices.”

He goes on to write about the importance of networking and creating a team that will support you in your endeavors. “Everyone who wants to do something extraordinary in life should have a solid team. This is your inner circle of people who help keep you on track to achieving your dreams. I believe that every team needs a coach, a mentor, a sponsor and a cheerleader, and you need to know the difference between each of them.”

In his efforts to help others, Wickliff knew that it wasn’t enough to write a book, so he decided to go on tour to get the word out. Last fall, he rented a van, hired a driver and an assistant, and hit the road for 28 days. He traversed the state, traveling to 25 cities, from El Paso and Amarillo to Texarkana to Brownsville. Wickliff spoke at 45 high schools, a couple of elementary schools, three churches and two universities, and at each stop, he gave away 10 copies of his book and a link to the electronic version of the text. “It was tough, it was crazy, Wickliff recalls, “but it felt great to give back to the community.”

During his presentations, Wickliff said he managed to communicate well with the participants because he is only about 10 years older than most of them. “I am old enough to know better, but still young enough to speak their language,” he explained.

Victor Tejeda, a sophomore at Health Careers High School in San Antonio, had the opportunity to listen to Wickliff at a college readiness program at Rice University. “Thanks to Dr. Wickliff, I know today that I should follow all my aspirations and dreams and not to worry about how it all fits together,” Tejeda said. “He is a perfect example of doing what most interests you and this path is just as valuable as any other.”

Cynthia Ontiveros, principal at Young Women’s STEAM Research and Preparatory Academy in El Paso, said that her students connected with Wickliff. “The students felt inspired,” she said. “They were impressed with his accomplishments and motivated to push through barriers, never to let anyone tell them that they are not good enough or that they cannot achieve their goals. His talk helped students to embrace their differences, embrace where they come from and to set their goals high, because they can reach them in the future.”

Wickliff concluded all his presentations by telling students his secret on how to raise their grade point average without studying more than is required. “It’s a very simple thing: You say, ‘Yes, ma’am; no, ma’am; yes, sir; no, sir.’” He explained to the students that in college, grading can be very subjective, and professors will grade more favorably if they think you are smart and know the information.

“It’s an unconscious bias. Just being respectful goes a long way to making people think that you are more intelligent. It’s such a simple thing to do, but it makes a profound difference.”

Wickliff looks back on his whirlwind tour with fondness. He said he would do it again, even though he spent more than $50,000 of his own money after friends and family members donated a total of $5,000.

“I will never regret the money that I used to help a young person,” he said. “I have never regretted anything that I have ever given or any time that might have helped someone believe in themselves or change their life trajectory.”