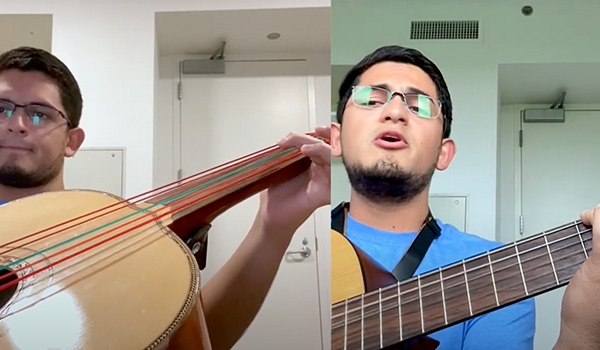 Rice graduating senior Cesar Zapata loves making music. It’s his favorite pastime, so when the outbreak of the coronavirus pandemic forced Rice to close campus and move all courses online, Zapata had more free time to devote to his art.

“Whether it be singing or playing guitar, guitarrón [a large six-string acoustic bass guitar], piano or a combination of the four,” Zapata said, “music is an outlet that allows me to connect with my inner self and the world around me.”

Connecting with the world around him is exactly what Zapata did, but from a safe distance. “Making music is a perfect way of practicing social distancing,” he said. When his friends started leaving campus to go home, Zapata hunkered down in his Baker College room and began playing music.

He spent several hours each day in his room, looking up chords and lyrics to new music and played them however he wanted. “While I did find this time to be extremely gratifying, one of the most beautiful things about music is being able to share it with others,” he said.

Sharing his music live with others posed a problem, so to conform to the social distancing guidelines, he went up to the fourth-floor balcony of his dorm, which faces the medical center, and with guitar in hand, played to whomever was passing by.

“It felt good to release music into an open space even though I did not know who was listening,” he said. To assure that someone was listening, he recorded musical videos of himself to share with his family and friends on social media.

Zapata also did a cover version of the Mexican song “Perdon,” (Sorry) by Alejandro and Vicente Fernandez. The three-minute song is sad and mournful, and Zapata sings it with a voice that conveys a lover’s hope of winning his girlfriend back. He recorded the song on video and posted it on Facebook and Instagram, where viewers can see Zapata in a double screen, simultaneously playing a guitarrón and a guitar. Zapata said it took him a full day to learn how to use the software to combine the audio and video and balance the multiple musical parts.

Creating the video was a bittersweet experience for Zapata. For the past two years, he has served as president of Rice’s Mariachi Luna Llena. Every spring the mariachi conducts a concert in Hamman Hall, but because of COVID-19, the concert had to be canceled.

“This cancellation meant that I was not going to be able to perform a series of vocal pieces that I had been preparing as a sort of senior send-off performance,” he said. “Creating this musical cover was a way for me to share my ‘senior song’ with an audience.”

As president of the mariachi group, Zapata scheduled performances for the group, which included performing the national anthem at a Houston Rockets and Houston Astros game. He also organized and led the fundraising for the group to perform at a music festival in Peru and wrote the lyrics to a remix of “Take Me Out to the Ball Game” in honor of the Houston Astros’ World Series performance.

A biochemistry and cell biology major, Zapata will be attending the UT Health School of Dentistry in Houston. But music will still be a major part of his life. “I will definitely continue singing and playing instruments in my free time,” he said. “In fact, I plan on being a part-time member of Rice’s Mariachi Luna Llena.”