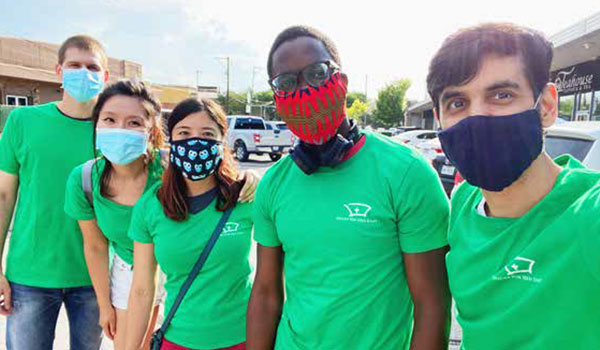 A couple of Rice University MBA students used their business skills this summer to give medical staff and the economy a small boost to combat the COVID-19 pandemic.

Coco Ma ’20 and Kathleen Harcourt ’20 created a nonprofit organization that delivered free meals to medical staff who treated patients infected with the virus.

“Medical staff were making tough choices and working hard to protect our community,” said Ma. “We wanted to boost their morale while also supporting small local businesses staying open,” said Harcourt. At Rice, Ma specialized in marketing and entrepreneurship and Harcourt focused on finance at the Jones Graduate School of Business.

SnacksForMedStaff, a nonprofit whose logo is “Help Medical Workers and the Economy, One Snack at a Time,” raised $20,000 through word of mouth and the online fundraiser GoFundMe. The money was used to buy meals and energy drinks from local restaurants and stores and delivered via UberEats and DoorDash to various hospitals in Houston and around the country.

About 3,300 meal packages were delivered to 23 hospitals such as Houston Methodist, Ben Taub, Memorial Herman in the Woodlands, Lyndon B. Johnson, Davam Urgent Care, Aspire and HCA in Conroe. Deliveries have also been made to hospitals in New York, Pennsylvania, Michigan and California.

The response from the medical staff was heartwarming. “They always told us how incredibly grateful they are and how much it means to them that we are doing this,” said Harcourt. “Many of them were stressed out and exhausted and receiving a small token of thanks really lifted their spirits to keep going forward. A few times tears were brought to their eyes because someone had thought of them.”

Taking care of health care workers was dear to Ma, who grew up in Hangzhou, China, and had heard the hardship that medical staff have endured there. “In the past several months, I had seen so many heartbreaking stories about frontline medical workers passing away due to coronavirus. Many health care workers had mental or physical breakdowns because they lacked personal protective equipment and heavy workloads.”

She added that the hospital, where her mother works as an upper-level administrator, had literally treated thousands of COVID-19 patients. “I remember one day my mom sent me a message saying she went to work that morning but the hospital couldn’t give her a mask because they had run out. But everyone still worked hard to treat patients like any other day.”

After watching through Chinese media how people were sending food and energy drinks to the health care workers, Ma said she thought about doing something similar in the United States. She proposed the idea to Harcourt, who loved it.

“At first, we only intended to spend our money and just send a few meals,” said Harcourt, “but once our classmates found out what we were doing, they started giving donations and sending us contacts at hospitals, and graduate student, Eric Schumacker ’22, spent a lot of time creating our website.”

SnacksForMedStaff, Harcourt said, took a life of its own and gave her and Ma a sense that they are making a difference during this crisis.

“We wanted to do something good for the community,” she said. “We were feeling down about how hospital workers were experiencing sometimes war-like situations with COVID-19 and how small businesses were closing and leaving people unemployed. This nonprofit empowered us to do something about it.”