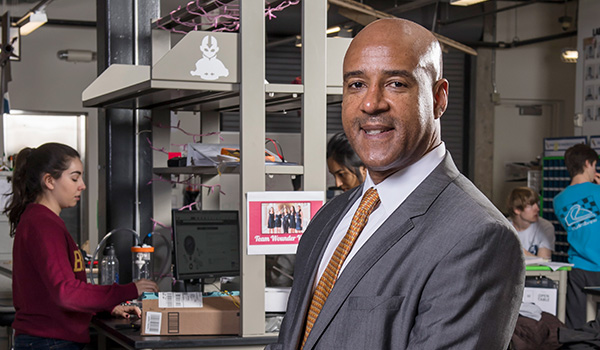 Reginald DesRoches believes that engineers make excellent problem-solvers. He thinks engineers are so good at thinking critically and working together that this country would be better off if there were more of them. That’s why, he says, it’s crucial to get kids excited about studying engineering

“Even if kids don’t pursue careers in engineering, just having an engineering background will provide them with the necessary skills to solve problems,” said DesRoches.

He would like to see engineers occupy all types of jobs and even serve as elected officials. Engineers, he explained, know how to work collaboratively in solving problems and can see the impact that public policy can have on the environment. They are also able to communicate technical information to a nontechnical audience.

DesRoches knows the benefit of engineering. Little more than a year ago, he was named dean of Rice University’s George R. Brown School of Engineering. He came from the Georgia Institute of Technology, where he was chair of the School of Civil and Environmental Engineering. DesRoches is a fellow of the American Society of Civil Engineers and the Structural Engineering Institute and specializes in research on the design of resilient infrastructure systems under extreme loads and the application of smart and adaptive materials. He served as the key technical leader in the United States’ response to the 2010 earthquake in Haiti.

Almost as soon as he arrived at Rice, DesRoches decided to expand the School of Engineering’s outreach programs. He assigned Yvette E. Pearson, associate dean for accreditation, assessment and strategic initiatives, to lead such activities. Before DesRoches arrived at Rice, Pearson organized the Engineer Big, Dream Big, Lead Big program as part of Engineers Week, which brought 45 middle school students to the Rice campus to solve engineering design challenges. The students learned about the importance of working in teams and how to apply their leadership skills.

During Mathematics Awareness Month in April 2017, the School of Engineering hosted a private screening of “Hidden Figures,” a movie about three brilliant African-American women at NASA who were the brains behind the operation to launch the first astronaut into orbit. A group of 70 middle school students from Houston-area schools were invited to watch the film, participate in a robotics demonstration and engage in conversations with minority scientists and engineers from NASA, the National Science Foundation and Rice.

“The event was designed to provide students with role models who look like them or came from similar backgrounds,” Pearson said.

Last fall, the dean’s office began offering tours of the engineering facilities to high school students. During the tours, students learn about the different disciplines in engineering and attend demonstrations about robotics, neuromechanics, haptics, diffraction and chemistry.

To expand the outreach programs, Pearson is forming a team that includes students, faculty, staff and representatives from industry and government who will plan and organize activities to attract students to engineering. The programs will specifically target students of color, students with disabilities, and students from low-income families and women.

“I would love to see us involved in a program similar to what they had at Georgia Tech, which brought underrepresented minorities to campus for three to four weeks during the summer to learn about engineering,” said DesRoches.

In the Georgia Tech program, students were required to build a project from scratch. One group made a sleeping bag for the homeless, which had a solar panel to provide heat during the cold weather. Another group created a robot. “These projects really help in developing leadership and communication skills,” DesRoches said. “It builds confidence and a can-do attitude.”

DesRoches and Pearson also want to start a program that will increase the number of transfer students from community colleges to Rice to study engineering. Very few students transfer into the School of Engineering from community colleges, DesRoches said. He would like to increase the number to 10 a year. DesRoches said the program will provide scholarships, academic support and professional development for the students.

The focus of another strategic initiative is to bring more students of color and women to Rice to pursue advanced degrees in engineering and science through a partnership with the National GEM Consortium, which provides fellowships to minority students seeking graduate degrees in STEM disciplines. Pearson is the Rice campus representative for GEM, and she plans to work with universities in Texas to host a GEM GRAD (Getting Ready for Advanced Degrees) lab to inform undergraduate students about opportunities that advanced degrees have to offer.

Under DesRoches’ leadership, Rice is partnering with Texas Southern University and the University of Houston to establish a program that will help minority Ph.D. candidates and postdoctoral scholars in engineering and computational sciences successfully pursue careers in academia. The ultimate goal of the program is to increase the number of minority faculty, said DesRoches. “It is critically important that people of color hold faculty positions because they will in turn attract more students of color to study engineering.”

DesRoches said he knows firsthand the feeling of isolation of attending a school in which there are no role models to emulate. He received three degrees — a B.S. in mechanical engineering, a master’s in civil engineering and a Ph.D. in structural engineering — from the University of California at Berkeley, where 200 professors taught engineering and not one was African-American.

Born in in Port-au-Prince, Haiti, DesRoches grew up in the New York borough of Queens. His father was as an accountant; his mother a nurse, and together they raised four children, all of whom graduated from college. In high school, DesRoches was recruited by Berkeley, a university he had never heard of, but when the school flew him in for a visit, he fell in love with the place. He chose to major in mechanical engineering simply because it sounded like the right thing to do.

“The biggest challenge I faced was not knowing any one in my community who was an engineer. For a kid, that makes you think that maybe this is something not in reach,” he said. “That’s is why it is so important to have as many people of color and women studying STEM fields.”