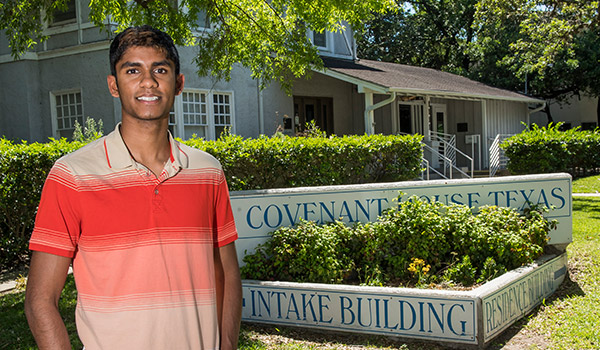 Once a month Shaurey Vetsa and about 25 other students gather at a private dining room on the Rice University campus to make 500 peanut butter and jelly sandwiches that they donate to homeless shelters in Houston.

They form an assembly line and with efficiency and camaraderie they complete the task within a couple of hours. They load the sandwiches in a student’s car and deliver them to Sally’s House, SEARCH and Covenant House. If they have any sandwiches left, the students hand them out to the homeless living under freeways.

“I prefer doing that, even though it might be a little bit more risky,” said Vetsa, a junior majoring in bioengineering. “But I like interacting with them. I won’t be changing lives in a fascinating way. I’m just making sure that they are not going hungry at least for a couple of hours.”

Vetsa is co-president of the Rice Coalition on Hunger and Homelessness, a service and advocacy student group that focuses on bringing awareness about the homeless problem in Houston. The other co-president is Kaitlyn Xiong, a junior, majoring in biochemistry and cell biology.

The Rice Coalition was started in 2013 by Ahmed Haque, who was a graduate student at that time, and initiated the Sandwiches for All project. When Vetsa became president last year, he said that he wanted to expand to include more substantial outreach efforts.

“I didn’t want members of our club to think that was the way to address the problem of homelessness,” he explained. “ Making a meal once a month is not at all going to combat this big issue. I wanted to create a more sustainable, long-term type of service.”

Most of the homeless youth are trying to get back to school and need help in preparing for the General Equivalency Diploma (GED), which allows them to graduate from high school. Some need assistance in preparing for the college entrance exam. Many are fleeing abusive family members and seek a safe environment to recuperate and move on with their lives.

Isaiah Bradley has been living at the Covenant House for seven months. Going there was his own choice, he said. “There were so many negative influences in my life. I would have been in jail right now if I hadn’t come here,” he said. “The best way to explain my situation is to say that it’s like a hurricane came through my life and tore up everything, and now it’s time to rebuild.”

To rebuild his life, the 20-year-old plans to be a nurse in the Navy, and to do that he must past an exam. Vetsa has been tutoring him on mathematics and vocabulary in preparation for the test. “Shaurey is really a reasonable tutor,” he said. “He gives you what you need and expects you to take advantage of the help.”

Stories such as Bradley’s is what Vetsa wants to capture in another program, the Photojournalism Project. In this project, Rice students take pictures of people who have experienced homelessness, interview them and then post the interviews on the Rice Coalition Facebook page in the same fashion as the Humans of New York, which takes pictures of people on the streets and creates a catalogue of the city’s inhabitants.

The purpose of the project is to humanize people who are homeless and give them a voice, Vetsa said. He also wants to dispel the conception that all homeless people are dirty, dangerous and on drugs. “There are some interesting stories about how people became homeless,” he said. There’s one man, he explained, who used to train horses for the Kentucky Derby and another who was a high school football star but because of unfortunate circumstances both became homeless. “We want to show that things happen, that circumstances are out of their control or that society could have failed them.”

Vetsa has been collecting stories by volunteering at SEARCH, an organization that helps people with a lived experience of homelessness. Vetsa is working with SEARCH’s Coming Home program, which provides a dinner once a week to people who were homeless and are now striving to reestablish their lives in housing. The dinner is a way to provide support and encouragement for people who might be in danger of falling back into homelessness. Once a week, Vetsa eats with the participants, along with other volunteers, and provides them with love and community.

Lisa Levy, program coordinator for Coming Home, said Vetsa and the Rice Coalition are deeply committed to understanding the homelessness issue in Houston. “They are truly passionate about helping others do the same.”

As for the future, Vetsa plans to be a doctor. “As a doctor, I will be able to alleviate complex medical problems for people, especially the urban poor,” he said. “I would like to work with them so that I can remove a burden that they are suffering and let them focus on other aspects of their lives.”