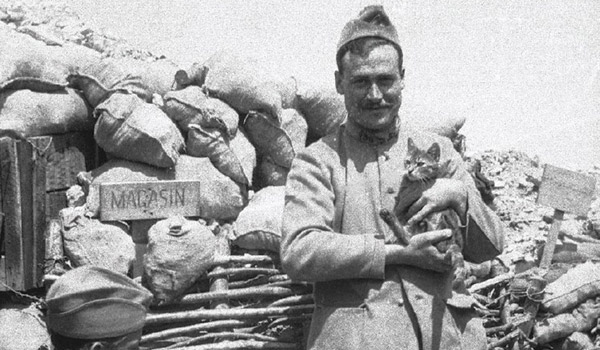 Rice University’s Fondren Library attracted a stream of visitors during the spring semester with an exhibition commemorating the centennial anniversary of World War I. The exhibition, “100: The Great War Seen Through the Eyes of Two Soldiers,” combined a scrapbook created by the wife of a Rice alum with black and white photographs taken by a French soldier.

The scrapbook, donated to the Woodson Research Center at Rice, shows the journey of James S. Waters ’18 as he traveled from Houston to the battlefields of France to Germany and his return home.

French soldier Paul Gueneau took the photographs from the trenches with a Kodak VestPocket. By joining Waters’ scrapbook with Gueneau’s photographs, the exhibition provided a unique and fascinating perspective of World War I.

Gueneau was from Nevers, France, and served with the 56th Infantry Regiment from 1914 through 1918, when he was injured by mustard gas during battle just a few months before the armistice. Gueneau’s granddaughter, Pulcherie Gueneau de Novoa, who lives in Houston, curated the exhibit along with Woodson Research Center and French association Le Cercle de Valmont. Her grandfather’s stark photographs included pictures of the soldiers having a snowball fight and holding kittens in front of a food pantry. De Novoa was able to receive the official recognition of the French Mission Centenaire and the U.S. World War I Centennial Commission for the exhibit with help from sponsors Société Générale and Hexagroup.

Waters was the captain of Rice’s track team and a leader of the famous 1917 escapade to recover the kidnapped Sammy the Owl from Texas A&M University. Waters served from June 1918 to June 1919 in the Corps of Engineers with the 360th Regiment, 90th Division. He was the commander of a combat platoon in the St. Mihiel and Meuse-Argonne campaigns, resulting in his promotion to the rank of first lieutenant and the receipt of three combat stars. 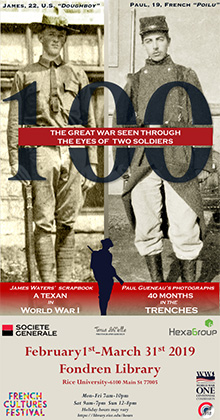 After World War I, Waters became the first person at Rice to hold the title of Instructor of Engineering. Waters was born in Galveston and went by the nickname of “Chief.” He retired in 1964 after 45 years of teaching. In 1965, a former student of his set up the James S. Waters Creativity Award to provide a competitive monetary award to an undergraduate engineering student. Twenty-four years later, the award now honors two undergraduates each April with $1,000 each.

The Fondren exhibition drew students from Houston Community College, the University of Houston, Bellaire High School and the Awty International School. Constance Guillaume, an eighth grader at Awty wrote an essay about the exhibit. The black and white photographs allowed Guillaume to understand the hard living conditions of the soldiers fighting in the trenches. She realized after seeing the exhibit how proud she is of her great uncle, Michel Guillaume, who fought in World War I. The exhibit helped her understand his bravery in fighting for what was important to him, to his nation and the world.

“As the photographs were taken by a soldier himself, it makes these picture even more real,” Guillaume said. The essay won her the privilege of representing her school at Arlington Cemetery’s changing of the guard ceremony.

Numerous members of the public also viewed the exhibition, including Waters’ nephew, Ashley Waters, 75, who said that thanks to the show, he finally learned the details about his uncle’s World War I service. His uncle, he said, never discussed his time in the war. Ashley Waters also felt that he was finally able to pay his respects to his uncle, who died while he was serving in the Navy.