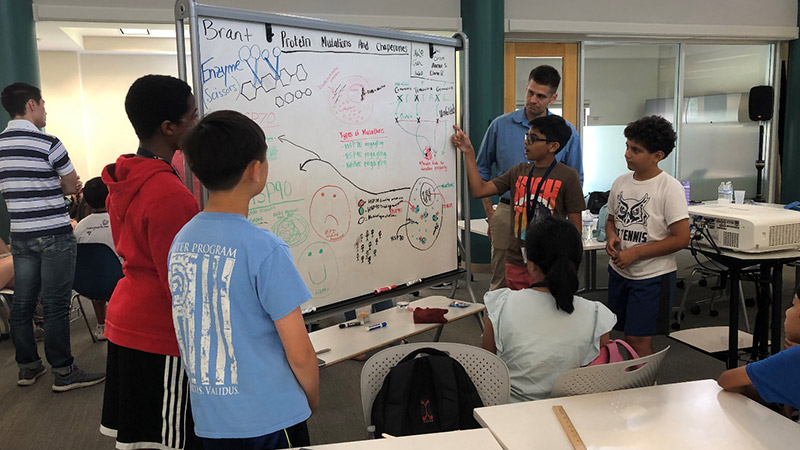 We all know kids are smart, but are they smart enough to understand the innovative research going on at Rice?

Yes! The Graduate Student Association (GSA) and Rice Office of STEM Engagement hosted the first Rice Youth Science Workshop on campus for 52 middle school kids. The day started with Matthew Bedell, GSA co-director of Community Outreach, giving a presentation about Rice, research, the scale of the universe and where the different sciences “live” and interact on that scale.

Then Brant Gracia, postdoctoral fellow at MD Anderson, described the importance of science communication and outreach. Thanks to Gracia, this program has traveled to Houston all the way from Austin, where he led similar events as a graduate student with the Present Your Ph.D. Thesis to a 12 Year Old outreach project at the

University of Texas at Austin. Students were grouped by interest with Rice researchers in areas ranging from computer science and mechanical engineering to psychology and global health.

The 12 researchers shared the background and premise of their Ph.D. work with their small group of students using white boards — no computers, videos or PowerPoints allowed. Students took notes and asked questions, unraveling the mystery of cutting-edge science with their youthful curiosity.

After some team building that included a campus tour and pizza lunch, the students took charge, drawing illustrations and organizing the take-home messages on white boards to create posters to represent each small group’s project. Finally, the middle school kids brainstormed a presentation with their group leader, putting on their lab coats and assuming the role of the scientist, and then explained their Ph.D. projects to the other groups and parents — even fielding questions from the audience about their own scientific intuitions or favorite parts from what they learned.

So, did the middle school kids really understand the Ph.D. level research? We surveyed the students using a pre-post retrospective survey used previously by Gracia at UT Austin, and the results were overwhelmingly positive. Fifteen questions before and after showed significant change toward more interest in science. Students felt the best parts of the workshop were learning new things, getting to know the people in their group and sharing what they learned. The workshop’s initial influence on students was higher interest in science at the research level.

One student said, “It made me a lot more interested in science than I already am.” The feedback for improvement from the kids included having more time together, getting to do scientific research themselves as well as having even more pizza and snacks.

The official data from the graduate student scientists and engineers who shared their Saturday with these youths are still pending, but their informal feedback was also positive. Graduate students said that they would enjoy more scientific mentoring opportunities, and that they would like to do the Rice Youth Science Workshop again. Being able to explain one’s Ph.D. project to kids can be very helpful and motivating for the researcher. In fact, multiple graduate students said that the middle school students asked them questions similar to questions asked by their dissertation committee.

Plans are underway to make these workshops a regular occurrence at Rice, and open the program to even more local families. Events like these are formative opportunities for both scientists-in-training at Rice practicing their broader communication skills as well as curious children looking to embark on fun explorations into the scientific world around them.